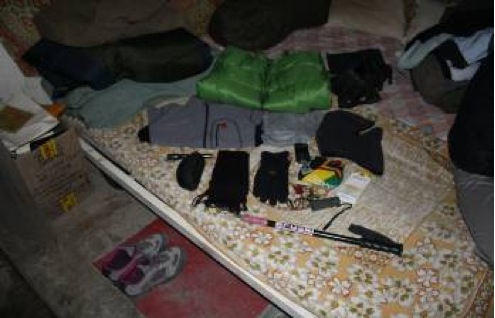 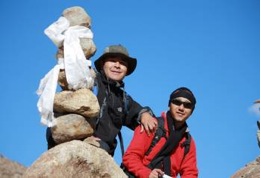 We reached Organic Retreat by car (a black Alto) to collect some Medicine and to say hello and bye at same time to my Father and Brother. As we knew, there was long and tiring day awaiting us. 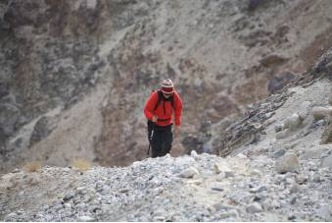 Started walking from organic retreat towards Hunder Dok, which is located at the height of 16000 ft above sea level and 8 hours hiking distance. We had lots of question in our mind we didn’t share it but we could feel it. 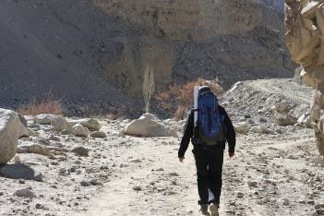 Took first break, we sat down, had water and lied down to take a deep breath, watching the steep road lying ahead. 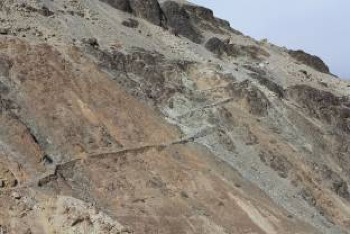 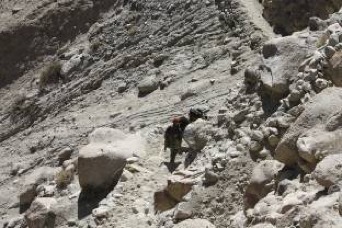 Met first person in route, going in opposite direction. Shared greetings and he advised us to move fast or else we won’t be able to make it to village before dark. 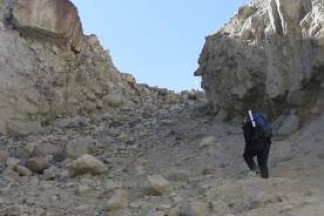 We have climbed the steep hill and it was really hard with the thin chilled air cutting my face but the elevation on hill made us sweat. We had apple on reaching the top. I have sun on my right and Ballu pa’s ruined kingdom on my left (Lost City) the apple is so sweet and juicy I wish the apple test same while I am home.

We have cross Dok La, while we were climbing the sun on your face light up and encourage me to walk further. This small act of making people aware of healthy life is bringing out myself and I am finding myself relax and happy. When we saw a mountain it looks unconquerable but as you are on top of it you know why lots of people give up their life while climbing. 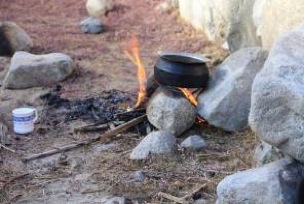 Lunch Break, this place is a first night campaign site during tourist season know as Skarchen a nice place, but really away from everything we were tired and Dawa was preparing  some solja (Tea). 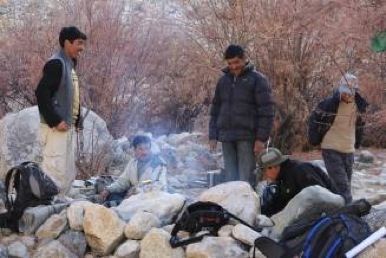 As the tea were boiling we had few guests Acho Sangdup, from Hunder Dok, Changchuk from Waachan , Acho Jigmet and Acho Tashi. Acho Tashi  looks like Mr Mark Robin(actor) from holly wood. They all were leading to same destination as ours.

Acho Sangdup is quite talkative and he told us that Acho Tashi (Robin) was really tired and he couldn’t keep up with them though he is from Hunder dok and they were making jock on him.

They got some brandy along them and as they invited us for a drink we said no and we decided to walk towards Hunder dok. 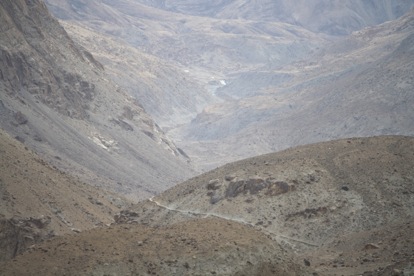 Now we can see Hunder Dok. We were really tired and my mind was not working. We decided to lie down and take a nap for a while before we hit the village and the people. 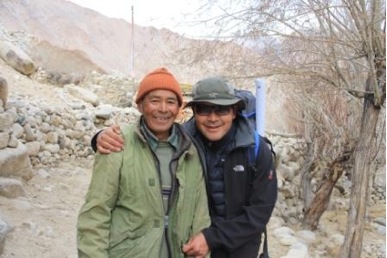 We reached , Headman of the village welcomed us with Phoks Anchor (Ladakhi way of welcoming) We had tea and biscuit at his house and I learn that his house is not our final resting place so we move to Acho Sangdup house who is a good friend of mine and it was 6:55 pm when we reached our final destination. Temperature outside was minus 12 already. Wondering what it would at midnight.

He work as food supplier, trekking guide and building contractor, He is the one who build the government’s medical aid center in his village.

We are off to bed. Goodnight. 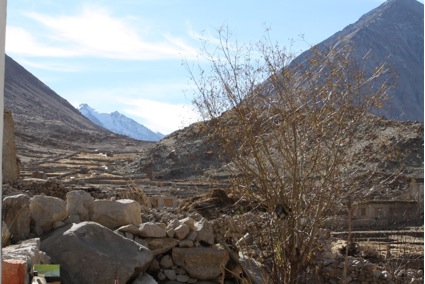 We are ready for a big day with a hope that our hard work will bring a little change in the health condition of the people. 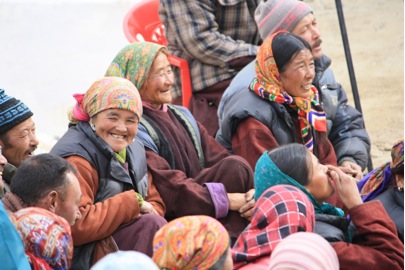 Entire village’s people gathered to meet us. There were 50 peoples on the whole with 18 women and lots of old people. All of them wanted a health check up as it seems I was the first doctor to visit their village over the last one year. It was good that I carried lots of medicine along with me as I knew it before. So I started examining them one by one. Most of them had hypertension and acid peptic disease. After the health check up, I talked about Hypertension and Acid peptic disease, followed by separate health talk about cervical cancer to women. They all were listening attentively and as soon as I was done with talk, all the women clapped and appreciate my concern for their health. Each one of them offered white scarf to me and Dawa as a gesture of their appreciation. The most encouraging things for us were that we overheard them talking that; nobody has ever talked to them about women’s health as a separate topic before in their lifetime. 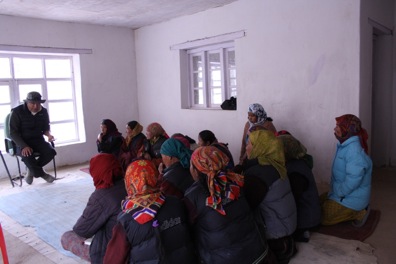 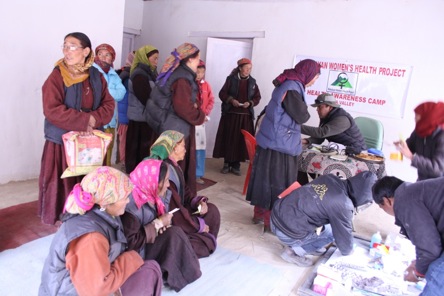 Finally we got a time for lunch and there was an arrangement for lunch in headman’s house.

It was delicious. We had long conversation with headman and other representative about many health issues such as, when somebody get severe health problem it is impossible for them to transport the patient to hospital because of difficult route. Normally, one of the villager run down to valley to get medicine for the sick patient by telling the medical history to the doctor working in hospital. I promised them that in future I will be available in their village if such incident occurs in future.

The day went really great and I think we made it.

We are now at Acho Sangdup’s house and the great sense of satisfaction on Dawa’s face showed that his feelings were much the same as mine.

Many villagers came to invite us for a dinner and tea at their respective house. In fact, we paid visit to their house for tea and sat with them and talked about various health problem and difficult they have to face due to remoteness of their village. 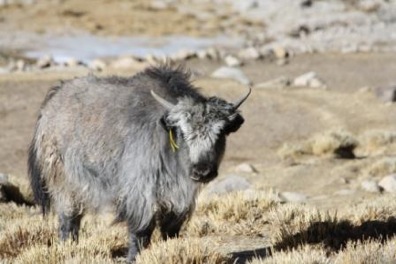 We were back at Acho Sangdup’s place. Four elderly villagers joined us for a dinner at his house. We talk lot regarding politics, black magic, and religious philosophy. What they really worried beside health problem was regarding the decreasing number of yak and their children has no interested in rearing yak. For centuries and centuries, they have been sustained by the yak and its product. Now they are afraid that, soon there will not be any yak in their village.

Off to bed. Good night

Had break fast at Azang Sonam house Zimskang Pa and then another Breakfast at Acho Tashi’s house Phunchok Namgyal pa had lots. 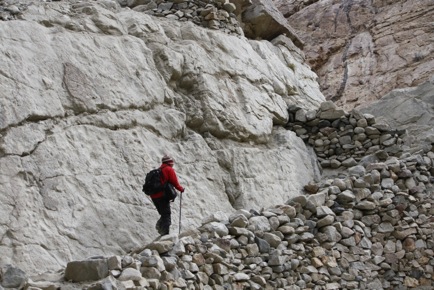 We are back on track again with a smile and little proud.

We reach to Skarchen where we had lunch break on 1st day and today we are having Kholag (Abhi Chuskit prepare for our journey. 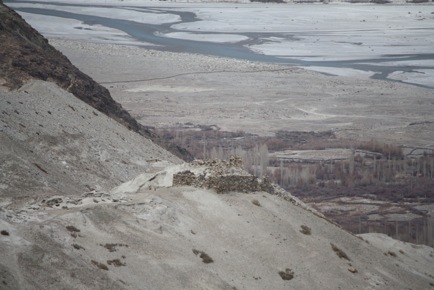 We are on top of Hunder Dok la we played Dire Straits Sultan of Swing from my cell phone. I am so happyJ

Back at starting point.