Ladakh Is an extremely remote region of India situated on the

north side of the great Himalayan mountain range on the vast

Tibetan Plateau. Bordering Pakistan to the east and China to the

West. The largest town in Ladakh is Leh at an altitude of 3500m

(10500 ft ). The majority of Ladakhls are Tibetan Buddhists and

the rest are mostly Sunni and Shite Muslims. 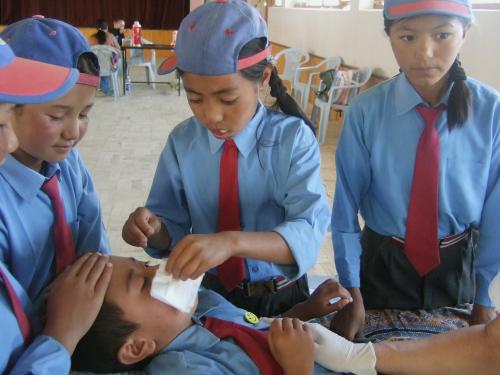 Ladakh is renowned for its remote mountain beauty and culture. It

is sometimes called ‘Little Tibet’ as It has been strongly influenced

by Tibetan culture. In the past Ladakh gained importance from

It’s strategic location at the crossroads of Important trade routes,

but since the Chinese authorities closed the borders with Tibet

and Central Asia in the 1960s, international trade has dwindled

except for tourism. Since 1974 the Indian Government has

successfully encouraged tourism In Ladakh although the strong

Indian military presence shows that it still remains a disputed

territory, between India and Pakistan and India and China. 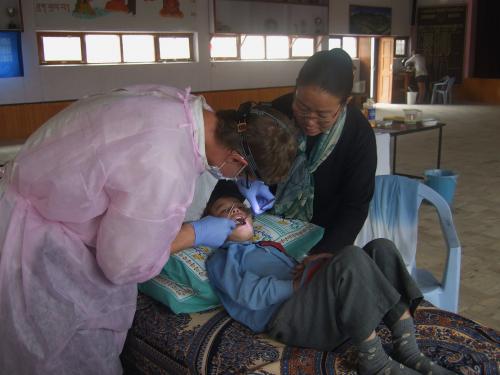 After centuries of isolation the Ladakhi people were suddenly

thrust into the ‘outside’ world when the Indian army established

military bases there to defend the country against their political

adversaries in Pakistan. The military presence brought many

and the now flourishing tourist trade. It also introduced refined

sugar Into the diet of Ladakh Inhabitants. and in a very short time

tooth decay was an epidemic. 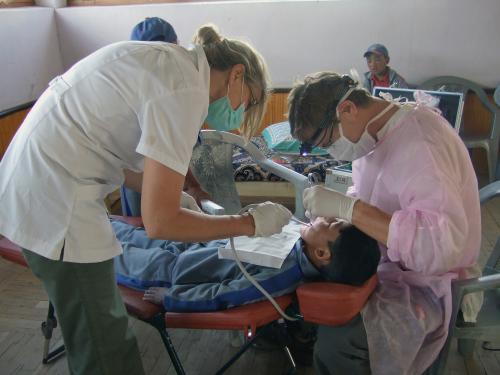 a virtual sea of snow-capped Himalayan peaks, before landing at

the ancient city of Leh in tne Indus River Valley. In winter there

is only one flight a day in and out of Leh. In the summer months

for vehicles – a two-day drive to either Srinigar or Manali. 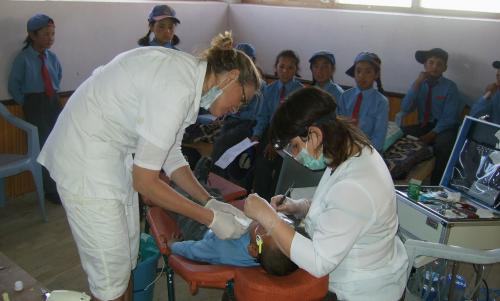 Thanks to an American philanthropist, Bill Kite. who spends

his time living and working between Ladakh. Kathmandu and

Redcllffs (Christchurch),  a small dental clinic has been set up

in Lamdon School, Leh. This local school has over 1,400 students and

a staggering 100% prevalence of untreated tooth decay. Not a

dental clinic as such, but a portable dental unit,  hand instruments 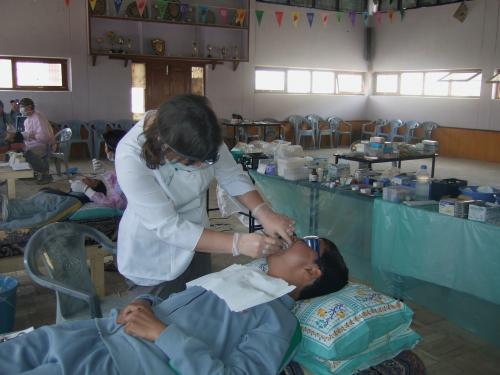 In August 2008 I flew to Ladakh together with another dentist

Steve McKinstry, my dental assistant Heather Tayler and a

non-dental friend Vangi Well who learned very quickly all about

on as it would make me rather light headed and dizzy. Heather.

unfortunately. had a pounding headache for several days.

We set up in the school hall. One of us working the portable

dental unit doing restorations while the other dentist worked

on extractions on one of the beds. Conditions were often

overwhelming with the sheer numbers of students in need of

urgent dental care, but we worked long, hard days to treat as

many patients as possible. Over 12 days we would have treated

almost 400 children between us.

Most of our patients were from the school, aged between 5-18

years. Teachers and families of the students were treated too. Most

of the extractions were first and second permanent molars.  After

only a few years in the oral cavity. they were worse than anything I

professional career. And all these extractions were done with no

X-rays or surgical equipment!  I am proud to state that in two weeks

of extracting these teeth I only left one root in situ.

has received training over the last few months in basic dental

procedures and will follow-up with basic treatments full time

translations with any visiting dental team.

We were very well looked after. Our accommodation and food

was paid for. we were invited into people’s homes. shared their

meals. taken to various Buddhist monasteries and even drove

feet). just short of the full height of Kilimanjaro.

hygiensts, who volunteer to come to Ladakh and contribute

hundreds of children of Lamdon School will gratefully be provided

all accommodations and meals, tours of the Indus river valley

accompanied by Buddhist scholars and treks around the area.

Thanks to the following for their generous donations:

News From The Vision Project

NEWS FROM THE WOMEN’S HEALTH PROJECT

News from the Dental Project

News from the Lamdon Clinic