Dr Quek Swee Chong returned to Ladakh May 17>25 with a impressive team of 16 gynecologists, nurses and assistants to successfully conduct the most ambitious and productive cervical cancer screening and treatment camp in the history of The Himalayan Women’s Health Project. Just over 2,000 women from a wide social spectrum of villages, nomadic tribes and women’s alliance groups were systematically brought to The Ladakh Heart Foundation Hospital venue by their community leaders and all received comprehensive, personal and effective screenings & treatments for a wide range of gynecology related issues 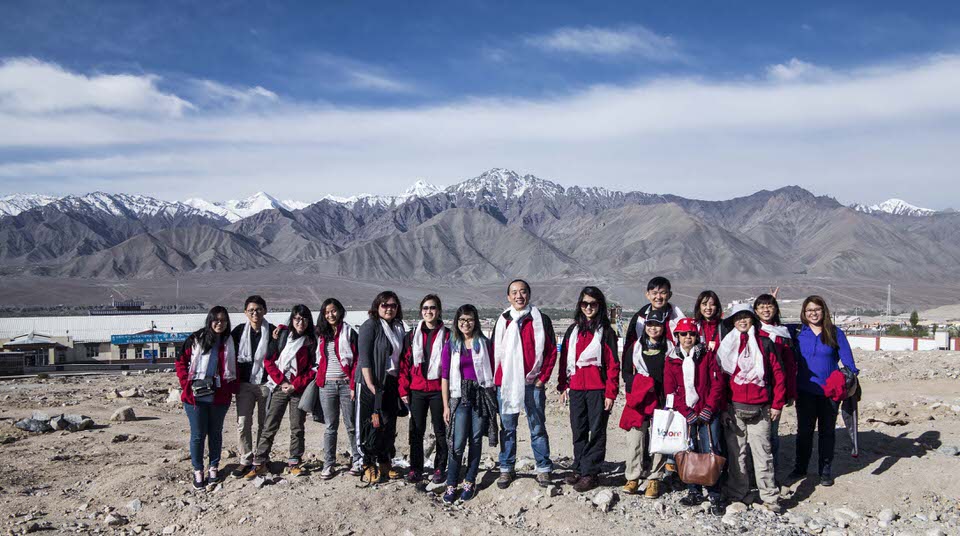 Our local Himalayan Health Project team registered each woman so that a permanent gynecological medical record could be created for them. The registration team then took basic blood pressure, oxygen saturation and weight measurements before the women were directed to a waiting area ahead of their preliminary examinations. 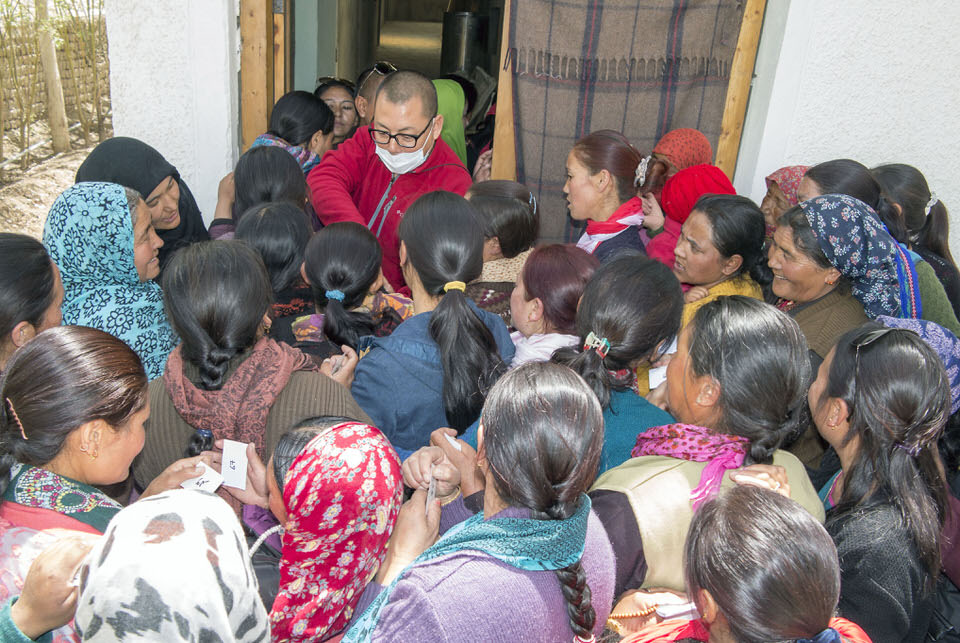 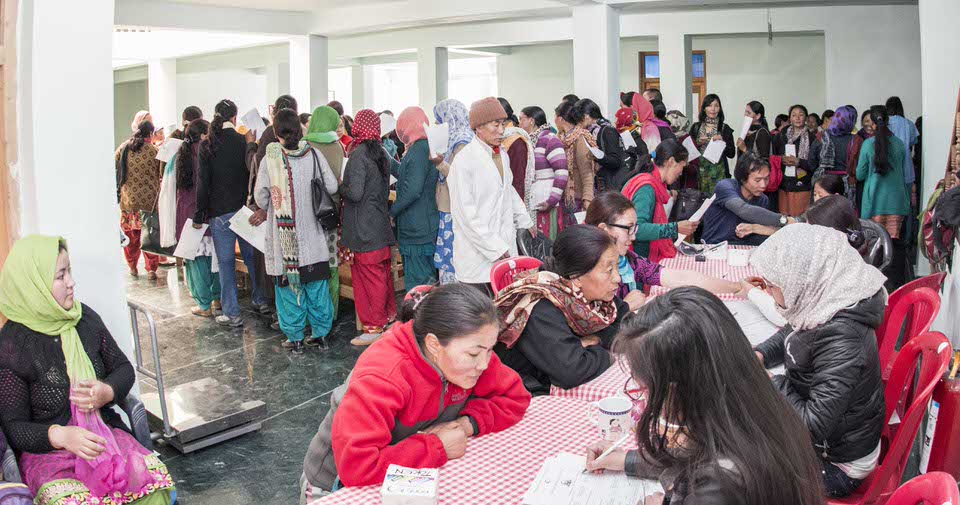 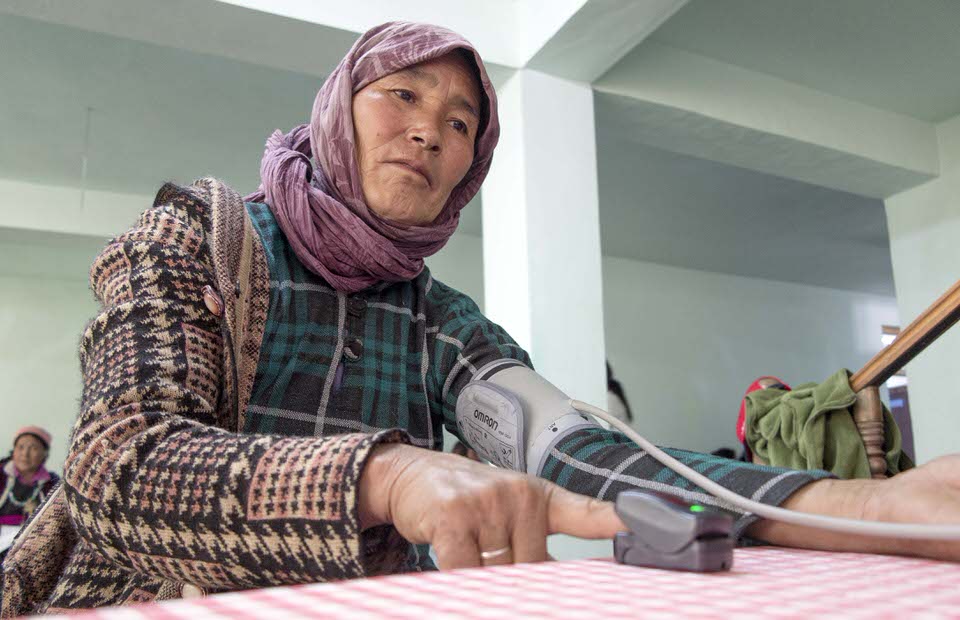 Each woman attending the camp was given a basic medical examination during the registration process which included blood pressure and oxygen saturation tests. Each woman was also weighed and had a medical history taken

In the waiting area, every woman watched a cervical cancer awareness and treatment video that was produced in the local Ladakhi language by our great filmmaker friend Erik Koto. They also watched a short introductory preview of the film “Lady Ganga” that was also dubbed in Ladakhi so that by the time their turn came to be screened by the gynecologists, they had not only learned a great deal about cervical cancer and the HPV virus as it relates to them personally, but also realized it is a global epidemic that unites women around the world in a preventable health care crisis. 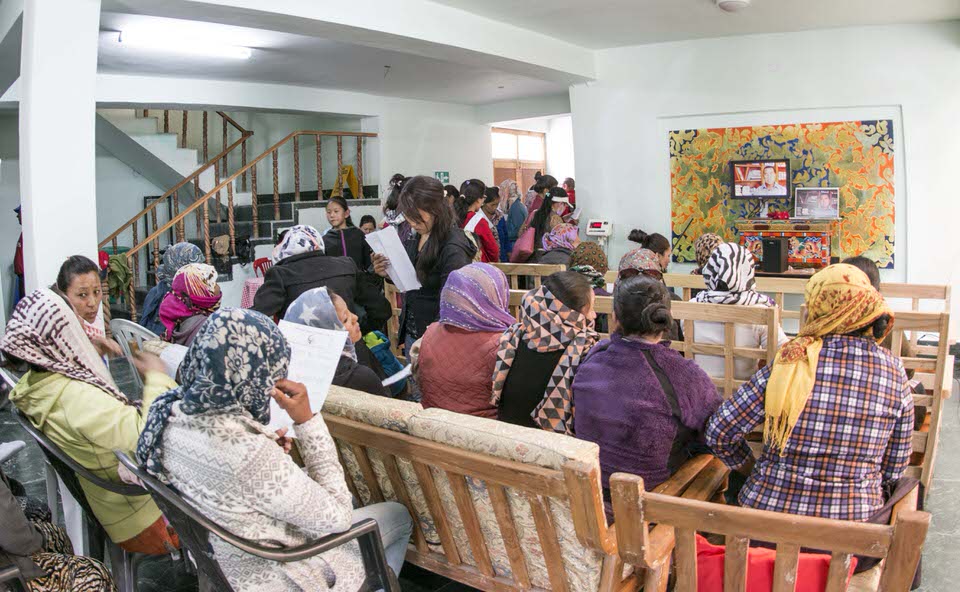 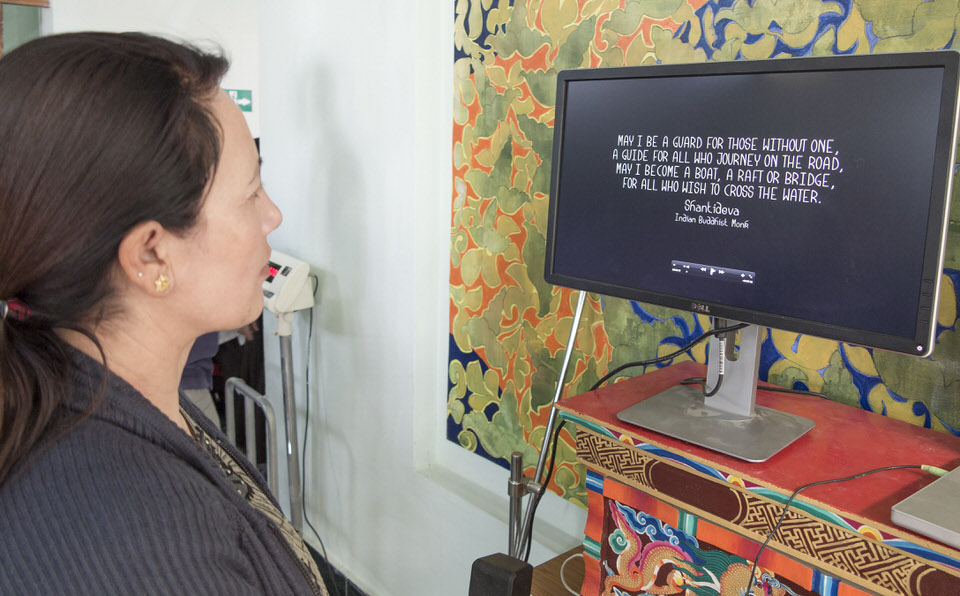 Women attending the camp watching educational video on the causes, treatment and prevention of cervical cancer prior to their examinations. They also viewed a preview of the documentary film “Lady Ganga” dubbed in Ladakhi Language

They were then led into one of our four screening rooms which were staffed by a trained gynecologist assisted by local translators and nurses. After a personalized gynecological history, they were then examined for evidence of pre-malignant lesions on their cervix by use of a simple, painless but effective technique known as VIA (visual inspection with acetic acid). This simple test quickly showed the doctors whether the patients had any evidence of cervical cancer in early or advanced stages of development. This VIA screening is especially important in the early detection of cervical cancer as the developing malignancy is non-symptomatic. This low-tech, highly effective screening technique is key to early detection of cervical cancer in isolated communities like Ladakh because it is simple, safe and can be administered by none specialist health practitioners as part of a wide scale screening programme. If evidence of developing malignancy is discovered, then the women can be directed to skilled gynecologists for necessary treatments to arrest the development of the cancer. 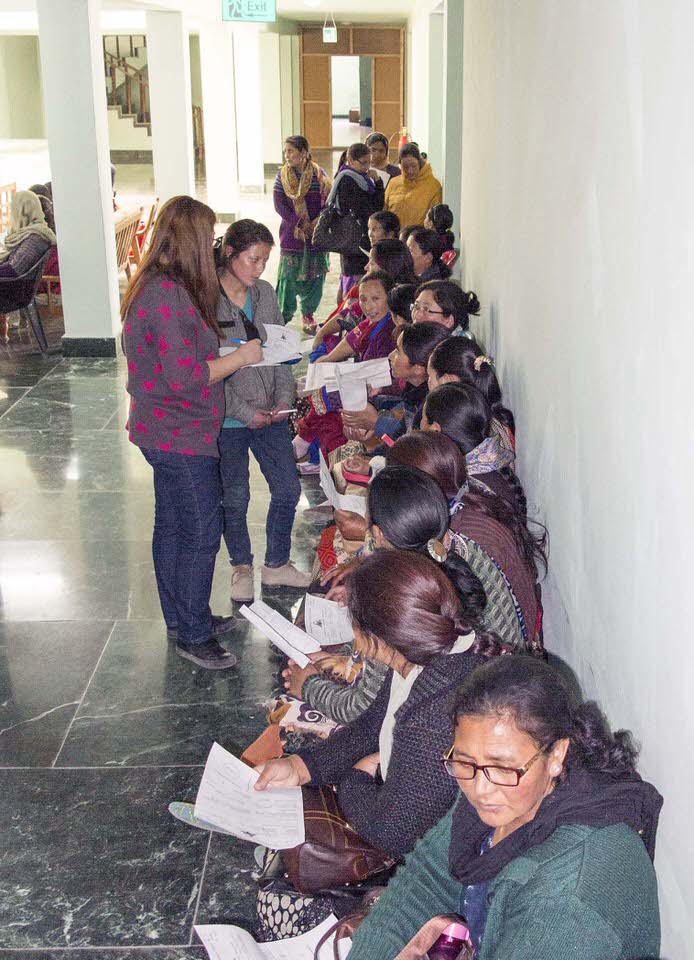 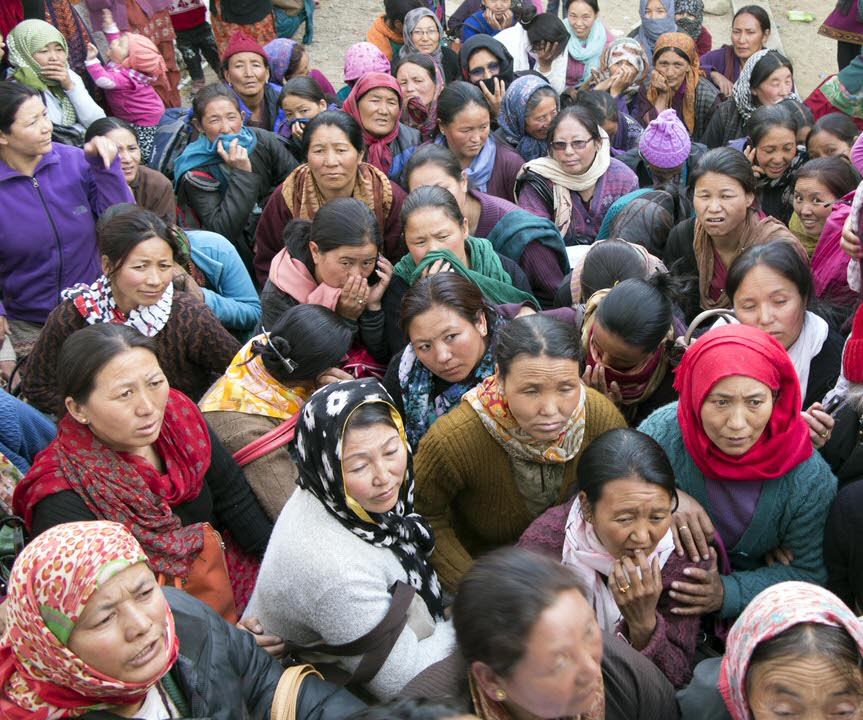 Fortunately for the women attending the 2015 women’s health care camp in Ladakh, the leader of the medical team was world renowned gynecological surgical specialist Dr Quek Swee Chong. Dr Quek and his indispensable surgical assistant Sister Khor performed over 100 surgical procedures on the women who were identified with early stages of cervical cancer. 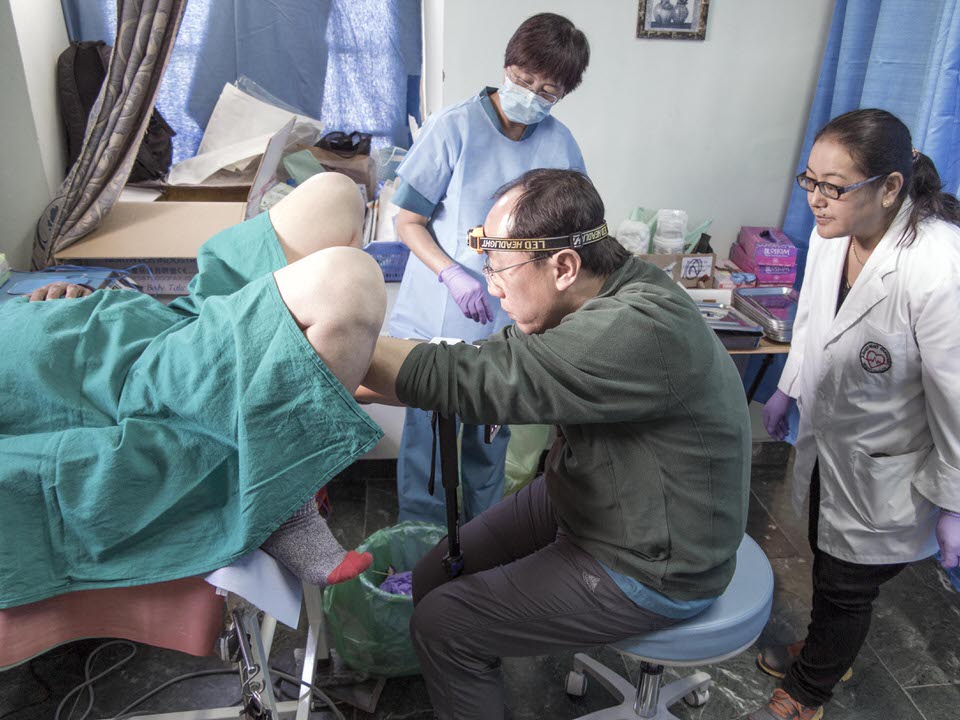 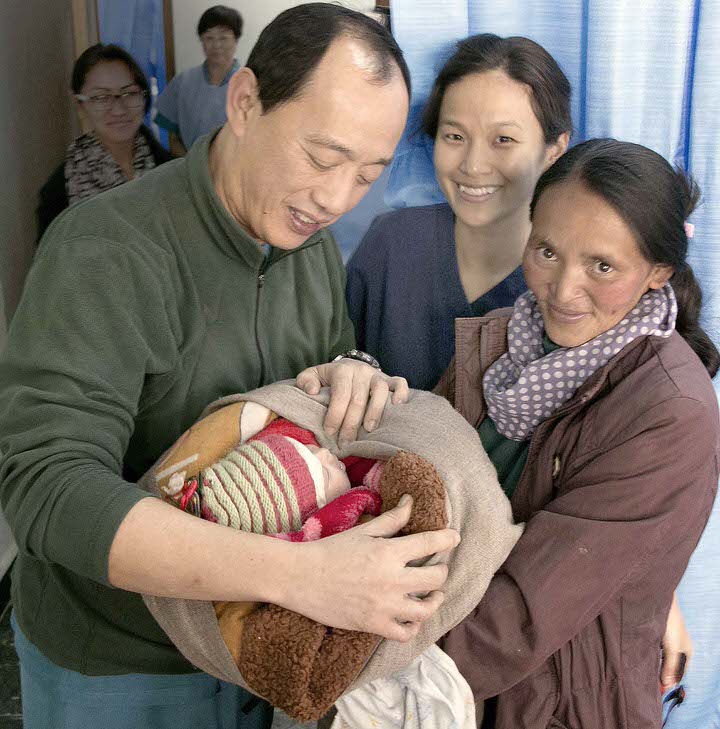 Dr Quek Swee Chong conducted over 100 surgical procedures on women attending the camp that were diagnosed with pre-malignant lesions and other treatable conditions. Dr Quek also enjoyed the gratitude from previous patients who had successfully conceived healthy babies after being treated for early stage cervical cancer in previous camps

Utilizing an impressive array of state-of-the-art diagnostic and treatment equipment that was made possible through fund raising efforts by the Tanglin Trust School community in Singapore, Dr Quek was able to provide world class surgical treatments in the basic operating theater that was available to him in Ladakh. Utilizing both the LEEP and Thermal Coagulation (Cold Coagulation) techniques depending on the complexity of each case, Dr Quek not only “re-set’ the malignancy clock back to zero in the women he treated, but also provided hands on training and guidance in the Thermal Coagulation technique for our local gynecology specialist , Dr Dekyi Yangzom. 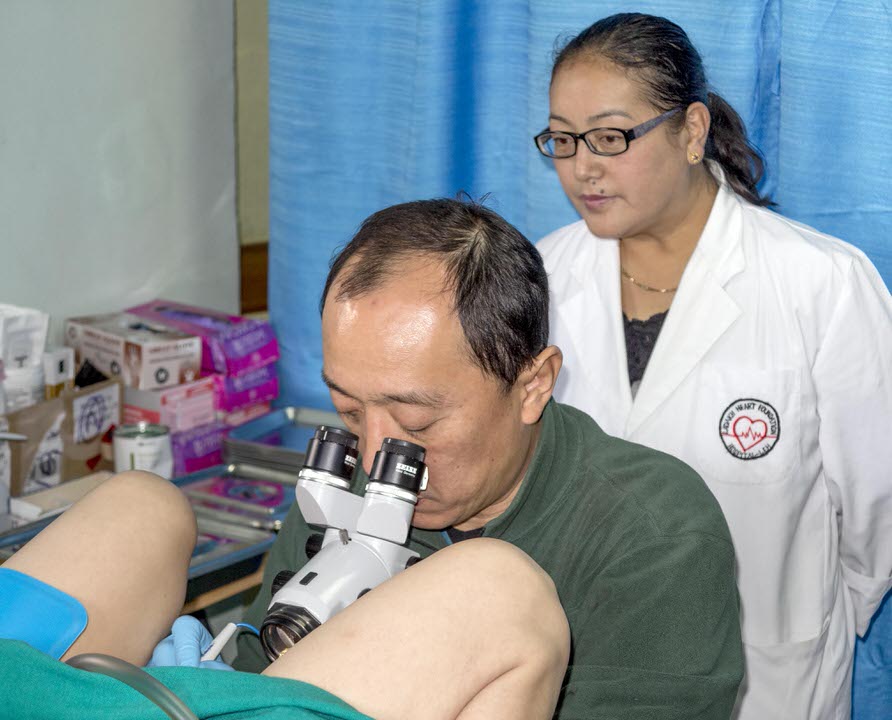 Dr Quek performing a LEEP on one of the patients while training Dr Dekyi in the relatively simple, but effective technique

During the course of the five day camp, six women were identified with conditions that necessitated surgical procedures that exceeded our logistical & medical capabilities to provide. Arrangements are now being made to fly these women to medical facilities in New Delhi, Kolkata or Chandigarh to receive the treatments they require. Two women from one of the most remote regions in all of Ladakh were identified with stage 2 cervical cancer and we are aggressively taking immediate action to evacuate them along with a family member to the PGI Hospital in Chandigarh for the surgical and radiotherapy treatment they require to save their lives.

All the women attending the women’s health care camp were also provided the opportunity to be screened and treated by one of our four international dentists led by Dr Marie Nordstrom who set up a basic dental clinic in another wing of the hospital. Over 200 women and their families received basic dental treatment on location and many others were referred back to our main dental clinic complex in Leh for more extensive root canals and other tooth saving procedures. 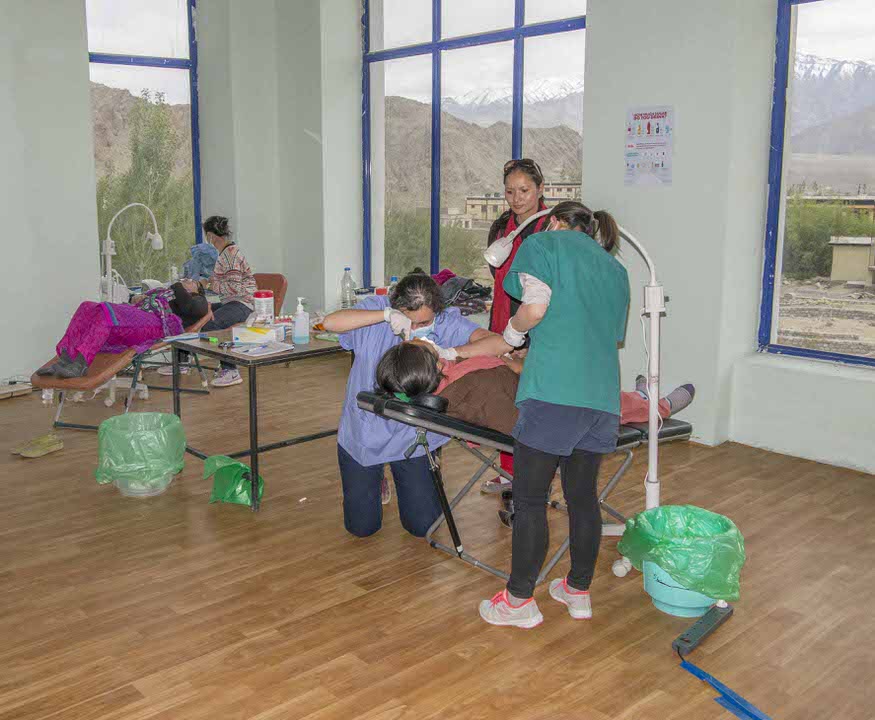 Gratitudes must be extended for the enhanced capabilities that our Himalayan Women’s Health Project now has at it’s disposal as a result of the fund raising efforts of The Tanglin Trust School community’s efforts in Singapore. As a result of the money raised during their auction, we were able to purchase state-of-the-art Gynocular portable colposcopes, a splendid portable ultrasound machine, a Thermal Coagulation surgical unit, laptop computers for record keeping necessities and a small van to transport screening teams out to the remotest regions of Ladakh. 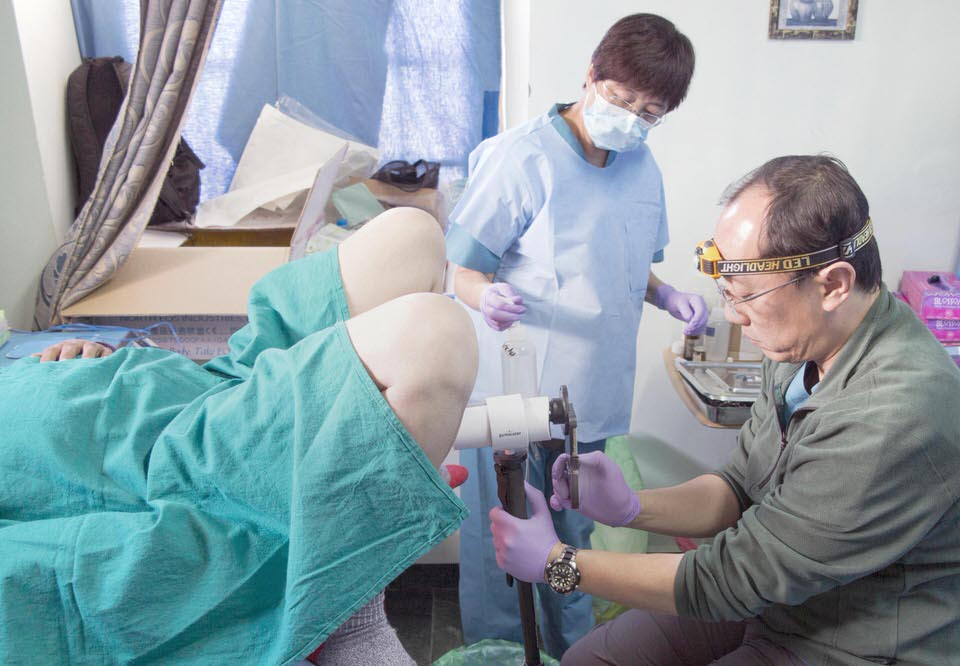 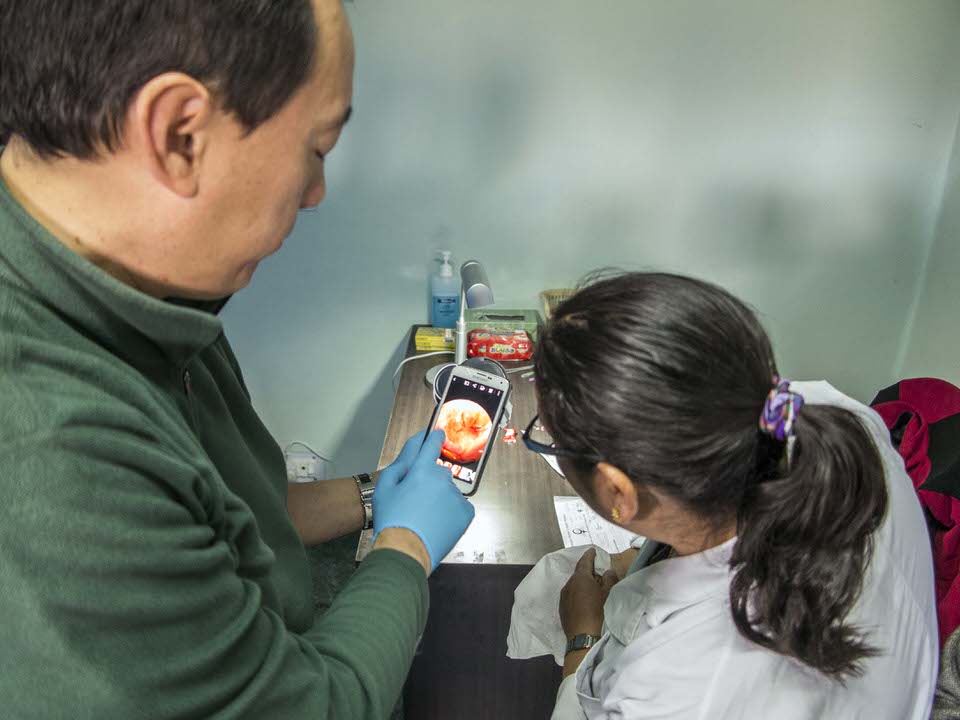 Dr Quek Swee Chong utilizing one of our three portable Gynocular colposcopes with the iPhone attachment. This remarkable combination of technology will not only provide the means for screening capabilities in the most remote locations in Ladakh, but also will enable our local doctors to send images of problematic conditions they encounter to Dr Quek in Singapore for consultation and diagnosis 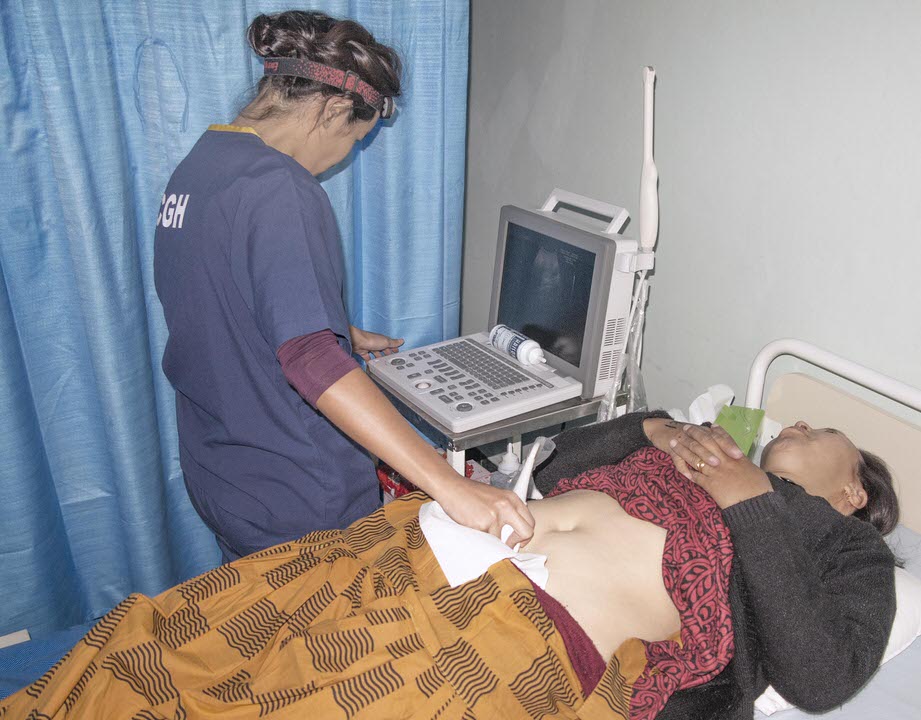 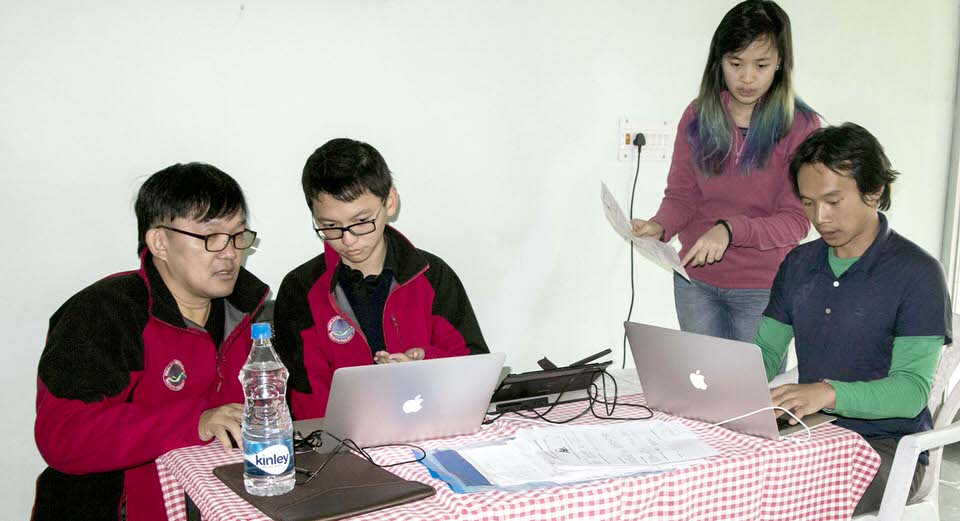 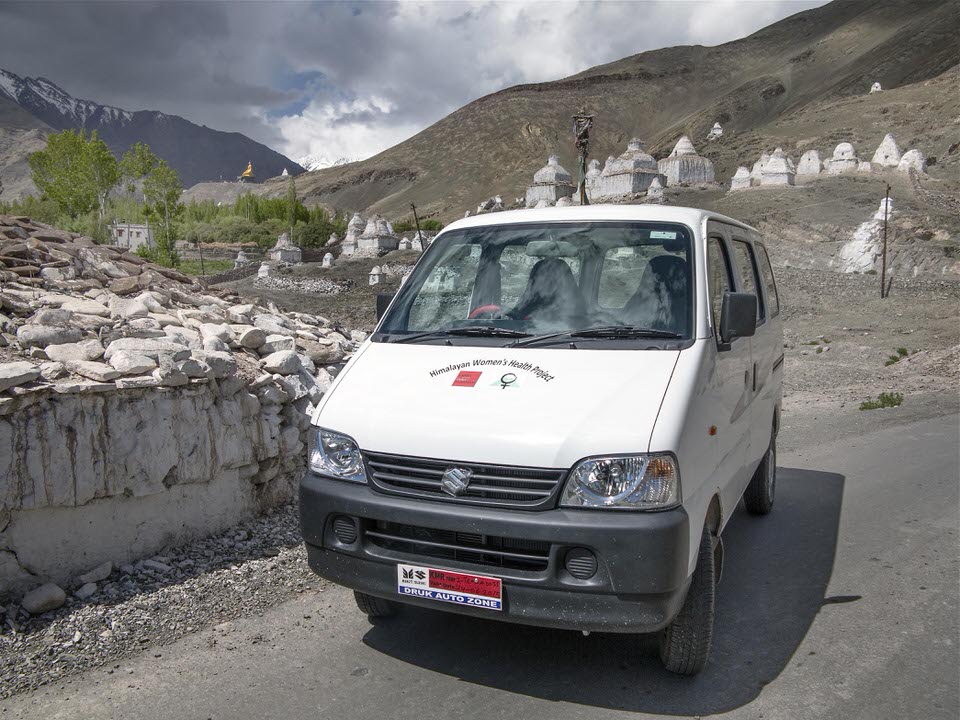 Our new passenger & cargo van will enable our women’s health care teams to bring our screening, treatment and education efforts to the most remote villages in Ladakh

We were also very pleased to host a film team from the United States that documented our 2015 cervical cancer screening and treatment camp as a continuum of their documentary portrayal of a heroic victim of cervical cancer named Michele Baldwin. 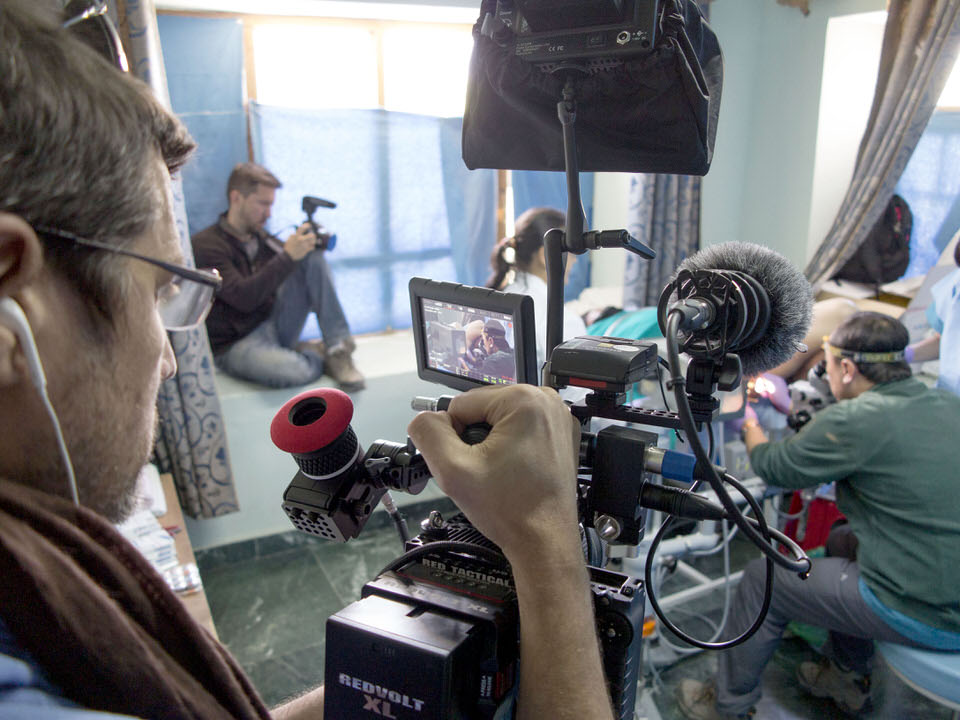 Their film, “Lady Ganga” movingly portrays Michele’s struggle with this preventable disease that takes the lives of over 250,000 women the world over each year. Michele’s final days were spent spreading the medical gospel of early detection, treatment and prevention of cervical cancer which has been irrefutably proven to be caused by strains of the HPV virus. Awareness of it’s cause and strategies for self-protection are key to its prevention. Wide scale VIA and PAP smear screening and early stage surgical treatments are the key to its cure. The Himalayan Women’s Health Project is honored and inspired to carry the torch of prevention, awareness and cure that Michele’s spirit ignited forward in our efforts to protect and heal the women of Ladakh.

Congratulations and heartfelt gratitude to Dr Quek Swee Chong and his team for their enormous and compassionate efforts during the 2015 cervical cancer screening & treatment expedition to Ladakh. 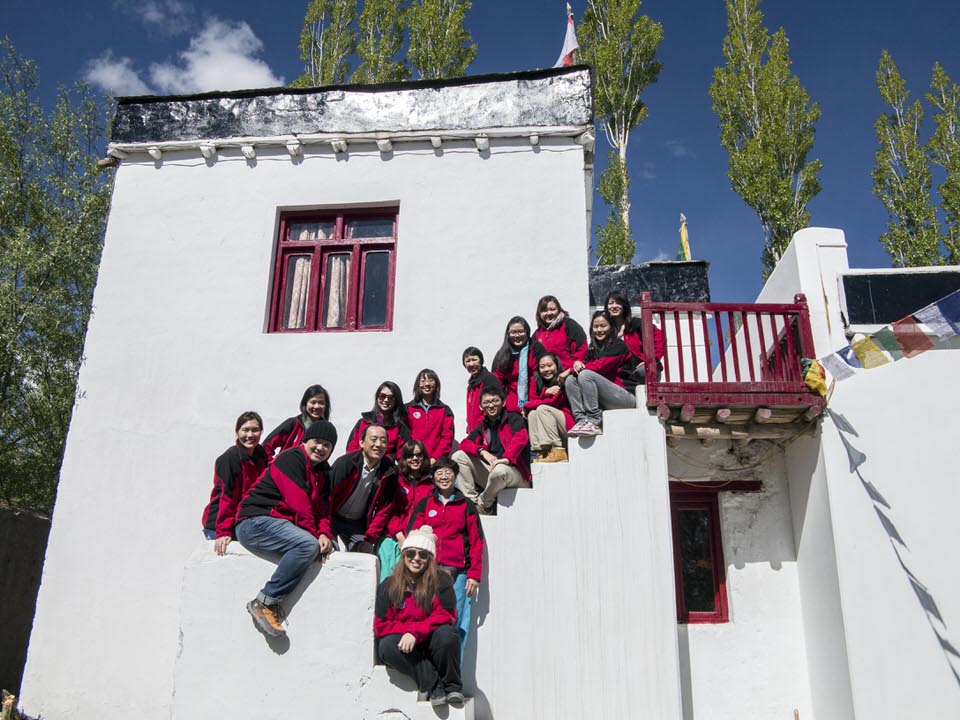